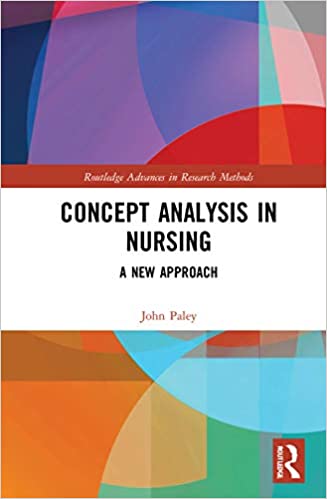 Have a Valid Coupon Code? Save an extra 20% on Concept Analysis in Nursing: A New Approach (Routledge Advances in Research Methods) 1st Edition by redeeming it below

Concept analysis is an established genre of inquiry in nursing, introduced in the 1970s. Currently, over 100 concept studies are published annually, yet the methods used within this field have rarely been questioned. In Concept Analysis in Nursing: A New Approach, Paley provides a critical analysis of the philosophical assumptions that underpin nursing’s concept analysis methods. He argues, provocatively, that there are no such things as concepts, as traditionally conceived.

Drawing on Wittgenstein and Construction Grammar, the book first makes a case for dispensing with the traditional concept of a ‘concept’, and then provides two examples of a new approach, examining the use of ‘hope’ and ‘moral distress’. Casting doubt on the assumption that ‘hope’ always stands for an ‘inner’ state of the person, the book shows that the word’s function varies with the grammatical construction it appears in. Similarly, it argues that ‘moral distress’ is not the name of a mental state, but a normative classification used to bolster a narrative concerning nursing’s identity.

Concept Analysis in Nursing is a fresh and challenging book written by a philosopher interested in nursing. It will appeal to researchers and postgraduate students in the areas of nursing, health, philosophy and linguistics. It will also interest those familiar with the author’s previous book, Phenomenology as Qualitative Research.

You can start studying now all you have to do is click the “buy” button and order your copy of Concept Analysis in Nursing: A New Approach (Routledge Advances in Research Methods) 1st Edition today
Read more on EPUB & PDF Formats

REQUEST ANYTHING NOT POSTED

Get More info or Samples of Concept Analysis in Nursing: A New Approach (Routledge Advances in Research Methods) 1st Edition below

Previous related Product
Next related Product
We use cookies on our website to give you the most relevant experience by remembering your preferences and repeat visits. By clicking “Accept”, you consent to the use of ALL the cookies.
No.
Cookie SettingsAccept
Manage consent

This website uses cookies to improve your experience while you navigate through the website. Out of these, the cookies that are categorized as necessary are stored on your browser as they are essential for the working of basic functionalities of the website. We also use third-party cookies that help us analyze and understand how you use this website. These cookies will be stored in your browser only with your consent. You also have the option to opt-out of these cookies. But opting out of some of these cookies may affect your browsing experience.
Necessary Always Enabled
Necessary cookies are absolutely essential for the website to function properly. These cookies ensure basic functionalities and security features of the website, anonymously.
Functional
Functional cookies help to perform certain functionalities like sharing the content of the website on social media platforms, collect feedbacks, and other third-party features.
Performance
Performance cookies are used to understand and analyze the key performance indexes of the website which helps in delivering a better user experience for the visitors.
Analytics
Analytical cookies are used to understand how visitors interact with the website. These cookies help provide information on metrics the number of visitors, bounce rate, traffic source, etc.
Advertisement
Advertisement cookies are used to provide visitors with relevant ads and marketing campaigns. These cookies track visitors across websites and collect information to provide customized ads.
Others
Other uncategorized cookies are those that are being analyzed and have not been classified into a category as yet.
SAVE & ACCEPT
error:
0
0
Medicalebooks.org
Your cart is empty
Continue Shopping