Brand: Allied Health | Health Care Administration, Finance, Medical Ethics & Law, Population Health & related
In Righting Health Policy, D. Robert MacDougall argues that bioethics needs but does not have adequate tools for justifying law and policy. Bioethics’ tools are mostly theories about what we owe each other. But justifying laws and policies requires more; at a minimum, it requires tools for explaining the legitimacy of actions intended to control or influence others. It consequently requires political, rather than moral, philosophy. After showing how bioethicists have consistently failed to use tools suitable for achieving their political aims, MacDougall develops an interpretation of Kant’s political philosophy. On this account, the legitimacy of health laws does not derive from the morality of the behaviors they require but derives instead from their role in securing our equal freedom from each other. MacDougall uses this Kantian account to show the importance of political philosophy for bioethics. First, he shows how evaluating kidney markets in terms of the legitimacy of prohibiting sales rather than the morality of selling kidneys reverses the widely accepted view that Kantian philosophy supports legally prohibiting markets. Second, MacDougall argues that an account of political authority is necessary for settling longstanding bioethics debates about the legal and even moral standards that should govern informed consent. 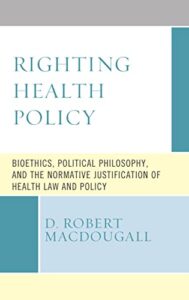 “In Righting Health Policy, MacDougall argues that since bioethics addresses questions of law and policy its discussions should be informed by political philosophy, especially Kantian political philosophy. MacDougall’s defense of this revolutionary view is careful, scholarly, and persuasive–and given the importance of Kantian theory in bioethics, must be taken seriously by all who work in this field.”

“Much of bioethics is deeply engaged in biopolitics. Yet, as D. Robert MacDougall argues, all too often its political aspirations lack any solid intellectual foundation. Righting Health Policy: Bioethics, Political Philosophy, and the Normative Justification of Health Law and Policy offers an engaging critique of the field, exploring ways in which philosophical analysis regarding the legitimate function of government is largely absent from major works on healthcare policy and bioethical methodology. The result is an important conceptual geography regarding the role of careful political philosophy for bioethics, including application to such topics as the distribution of healthcare, research on human subjects, organ transplantation, and informed consent.”

“This book should be read by any bioethicist who wants to recommend change in laws, regulation, or public policy. It shows convincingly that such recommendations require engagement with deep issues in political philosophy and cannot be made on the basis of ethical analysis alone. In the detailed analysis it also shows that bioethicists have often appropriated the ethics of famous philosophers while completely ignoring their political philosophy leading to unacknowledged inconsistencies.”

“D. Robert MacDougall has done us all a service with this thought-provoking and carefully argued examination of the role political philosophy should play in bioethics and the way that failing to engage with political philosophy impoverishes and foreshortens bioethical argument. His treatment of Kantian themes is particularly welcome, as bioethics has tended to overlook or downplay the value of Kantian arguments. He shows how illuminating these can be, particularly in debates about organ transplantation and markets in organs. This is an important contribution to bioethics and to thinking about public policy for biomedicine.”

“Robert MacDougall’s book is an astute defence of the vital role of political philosophy in bioethics. Health laws and policies regulate biomedical practice and are hence a matter of public concern. Enforced regulations lead us to questions about the purpose and legitimate concerns of the state. To justify health law and policies we therefore need tools that differ from the ones traditionally found in moral philosophy. This book compellingly lays out the innovative approaches that a political perspective on urgent practical concerns promises to deliver for a novel bioethics. MacDougall carefully employs a Kantian framework in several case studies, which illustrate his methodological conclusions.” 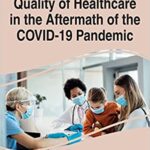 Have a coupon of ©Righting Health Policy Bioethics, Political Philosophy, and the Normative Justification of Health Law and Policy (Revolutionary Bioethics) Redeem it below and save an extra 20%. Terms and Conditions apply